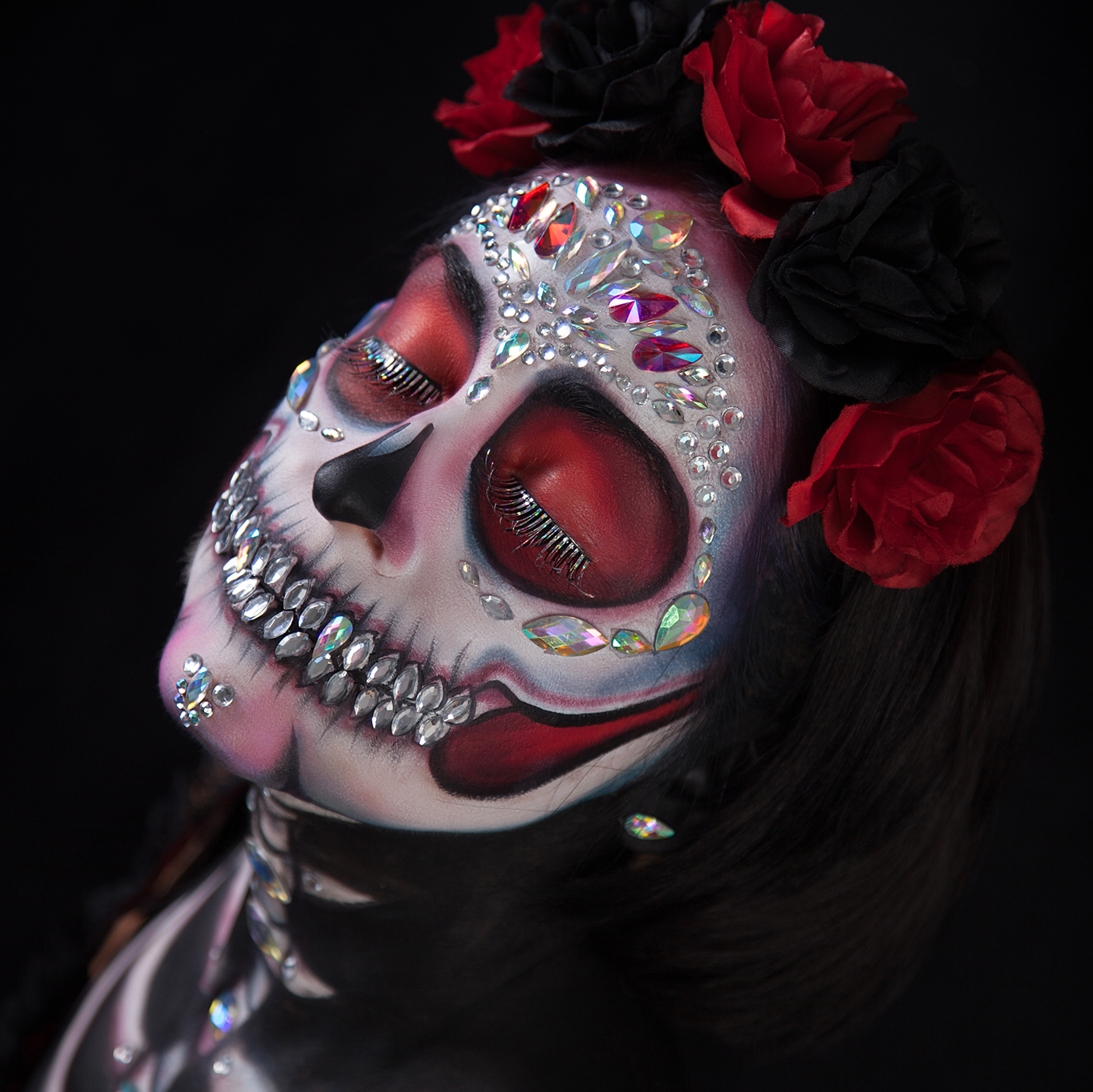 I am so, so excited about our wonderful new handmade silver collection which celebrates the Mexican Day of the Dead celebration. Amazing and beautiful statement bangles which have intricate and ornate designs.

So, we’ve all heard about the Day of the Dead or maybe seen the classic sugar skulls – but what does this celebration truly represent?

What is Day of the Dead?

Celebrated on November 1st and 2nd, this holiday originated in Mexico but is now celebrated in many places across the world. And although it has similarities to Halloween Dia de los Muertos (Spanish) is not the Mexican version of Halloween.

Halloween is traditionally a night of fear and mischief where the spirits are evil (children were disguised so that they wouldn’t be harmed) whereas Day of the Dead is a joyful celebration where the spirits are welcomed over two days of holiday which is filled with colour and joy. Yes, the theme is death, but the purpose is to remember, honour and show love for family and friends who have died. The first day known as “Dide los Inocentes” is dedicated to children who have died, it is said that the spirits of babies and children who have died (called angelitos, "little angels") arrive on October 31st at midnight, spend an entire day with their families and then leave. Adults come the following day. which is the actual Day of the Dead.

Day of the Dead originated thousands of years ago with the Aztec and Toltec people, who believed that mourning the dead was disrespectful. For these pre-Hispanic cultures, death was a natural phase and not the end. The dead were still members of the community, kept alive in memory and spirit—and during Día de los Muertos, they temporarily returned to Earth.

Throughout Mexico people wear colourful costumes, have wonderful intricate make up, hold parades, dance in the streets, and make offerings to lost loves ones. On the Day of the Dead, people believe that the barrier between the spirit world and the real world dissolves and for one day the souls of the dead return to the living world to feast, drink, dance and play music with their families.

In pre-Hispanic times, people were buried close to their family homes and there remained a strong link with ancestors who had died. Now that the dead are buried away from their homes in cemeteries, graves are decorated, and celebrations are held there as it is believed that the dead return there first. Marigold flower petals are often scattered from the grave to the alters, created at home, to guide wandering souls so that they can find their way. In some communities, families may spend the whole night in the cemetery, with a feast to eat and drink and music playing as they clean the headstones and talk to their dead ancestors.

The centrepiece of the celebration is an altar, or ofrenda, built in homes and cemeteries. These alters are to welcome spirits back to their loved ones and the world of the living. They are decorated with a candle for each dead relative, bright marigold flowers (cempasuchil) and offerings of food, water and maybe a toy for a child. The smoke from copal incense, made from tree resin, fills the air around the altar. 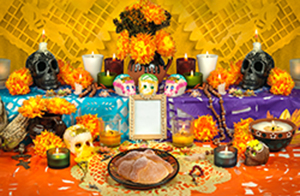 The spirits are greeted with offerings of foods that they enjoyed when they were alive. It is believed that the spirits consume the essence and the scent of the foods that are offered and when they leave, the living relatives eat the food, sharing it amongst family and friends.

Some of the most traditional items are Pan de muerto, or bread of the dead, a sweet bread decorated with bones and skulls made from dough. The bones might be arranged in a circle, as in the circle of life. Tiny dough teardrops symbolize sorrow.

Sugar skulls are part of a sugar art tradition brought by 17th-century Italian missionaries. Pressed in moulds and decorated with crystalline colours, they come in all sizes and levels of complexity. They are often inscribed on the top with the person’s name.

Drinks could be pulque, a sweet, fermented beverage made from the agave sap; atole, a thin warm porridge made from corn flour, with sugar, cinnamon and vanilla.

Calavera means “skull.” And is one of the most recognizable cultural and artistic elements of the Day of the Dead festivities

In the early 20th century, the printer and cartoonist José Guadalupe Posada incorporated skeletal figures in his art mocking politicians and commenting on revolutionary politics. His most well-known work, La Calavera Catrina, or Elegant Skull, features a female skeleton adorned with makeup and dressed in fancy clothes. The 1910 etching was intended as a statement about Mexicans adopting European fashions over their own heritage and traditions. La Calavera Catrina is of the most recognizable Day of the Dead symbols. 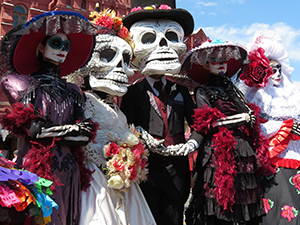 Day of the Dead is full of celebration and partying which spills into streets and public squares at all hours of the day and night. People dress up as skeletons and have their faces beautifully painted to resemble skulls, and, mimicking the calavera Catrina, they parade through the streets. Flowers also feature heavily in the costumes and make up.

Day of the Dead Today

Because of its importance as a defining aspect of Mexican culture and the unique aspects of the celebration which have been passed down through generations, Mexico's Day oof the Dead festival was recognized by UNESCO as part of the intangible cultural heritage of humanity in 2008. I always thought ‘cultural heritage’ meant physical monuments or collections of objects in a museum, but it also includes living expressions of culture and traditions passed down from generation to generation.

Thanks to recognition by UNESCO, Día de los Muertos is more popular than ever in Mexico and, increasingly, abroad but the most authentic celebrations still take place in Mexico. So maybe it’s time to plan a holiday…

The Day of the Dead and Silver Jewellery 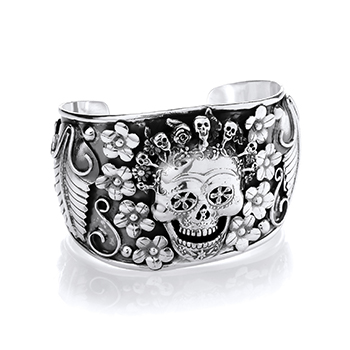 At Chopard, it is an annual tradition to create a limited edition watch for the Day of the Dead with Mexican motifs incorporated though the design – especially the iconic calavera (skull) symbol. 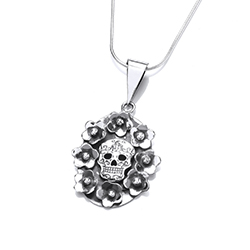 Jewellery is a way to express your personality and can often represent your beliefs, memories and family.  The positive and celebratory beliefs that Mexicans have of death inspires the living too and the skull represents the importance of living in the moment and enjoying every part of your life. For Mexicans, the skull also means the origin of life. 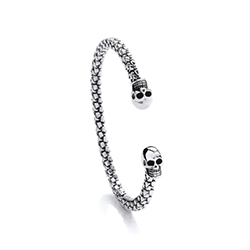 Our wonderful new collection has a range of handmade silver bangles in a range of prices, designs and widths. – from our iconic Day of the Dead Statement Silver Bangle set with an intricate skull and beautiful hand-crafted flowers. To a slim bangle set with two polished skulls at either end of the cuff – the perfect silver bangle for a man or woman. We also have a wonderful silver skull pendant which is a reminder to live your life to the full and to remember and celebrate memories of those no longer with you.